Your partner for perfectMadeira-Holidaysindividual and unique
X

For that we are known!

„Your excellent tips for sightseeing, excursions and restaurants have given us a wonderful villa holiday in Madeira.“
Read more in our guestbook

Fly and Drive In Madeira

Time to try a Madeira Fly & Drive in selected country hotels, manor houses or Quintas? Excellent cuisine and quality of accommodation are two important factors in our selection.

Why not explore Madeira by foot? In our individual Madeira walking tours we organize everything including transfers.  You enjoy the daily hiking tours to the fullest. 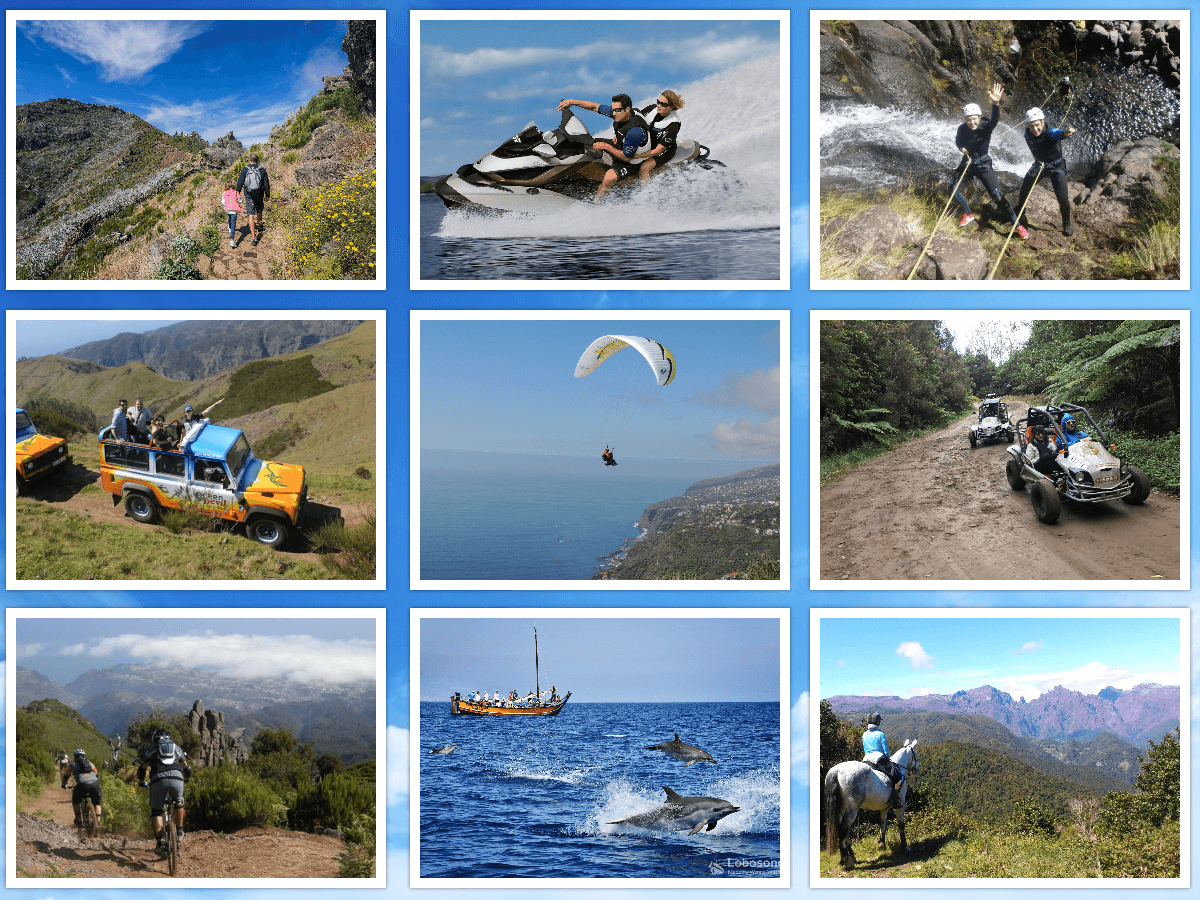 Whether you want to explore the island, exercise, have fun or experience thrills... with us everyone will find the right activity: hikes, excursions, boat tours, jeep safaris, canyoning, diving, golfing, horseback riding and much more.

The charming Hotel Quinta Alegre offers you a special kind of wellbeing vacation in the sunny southwest of the island of Madeira. In addition to Pilates by a recognized teacher, discover the beauty of the flower island on three guided hikes and a full-day guided tour.

Madeira means "wood" - and when the island was discovered early it got this name because of the many forests. Today it is called "floating garden" or "flower island in the Atlantic". Which suggests that many of the magnificent flowers only became native here later. The greatest flower splendour unfolds in spring and autumn. This is especially true in the southern coastal areas - but thanks to the mild climate, it blooms all year round. About 16% of plants are endemic, i.e. they are original and do not grow anywhere else in the world.

Mainly merchants in the 18th century brought attractive tropical and subtropical plants to the island and planted them in their garden parks. Many of the parks can be visited today, such as "Blandy's Park".

Today there are 760 species, which come from 112 plant families. In May the Jacaranda trees bloom delicately purple and in autumn the Kapok trees. Ochideen all year round, as well as the bougainvillea, the hibiscus, the bell mallow, the flamingo flower, the balloon vine and the Strelitzie. In spring, azaleas, rhododendrons, aloe and kamelia, trumpet and passion flowers unfold their splendour - in summer it is hydrangeas, chrysanthemums, magnolias, the African love flower, oleander, frangipanie... but also many plants known from Central Europe, such as the Amarylis, the Begonia, the Yolk Flower, Freesias, Geranias ... can be seen.

The altitude is decisive for the occurrence. Agriculture is carried out up to 700 metres, followed by the laurel forest up to about 1,400 metres in altitude. Today there is still an extensive nature reserve where the Laurisilva grows. Below the growth limit, eucalyptus has spread. It grows quite fast and can reach 65m high.

The island's many palm species lend an exotic appeal, growing on the lower reaches, often close to the coast. And of course the island is rich in fruits, the Central European fruits are joined by figs, melons, papaya, avocado, tamarillo, oranges and lemons ... 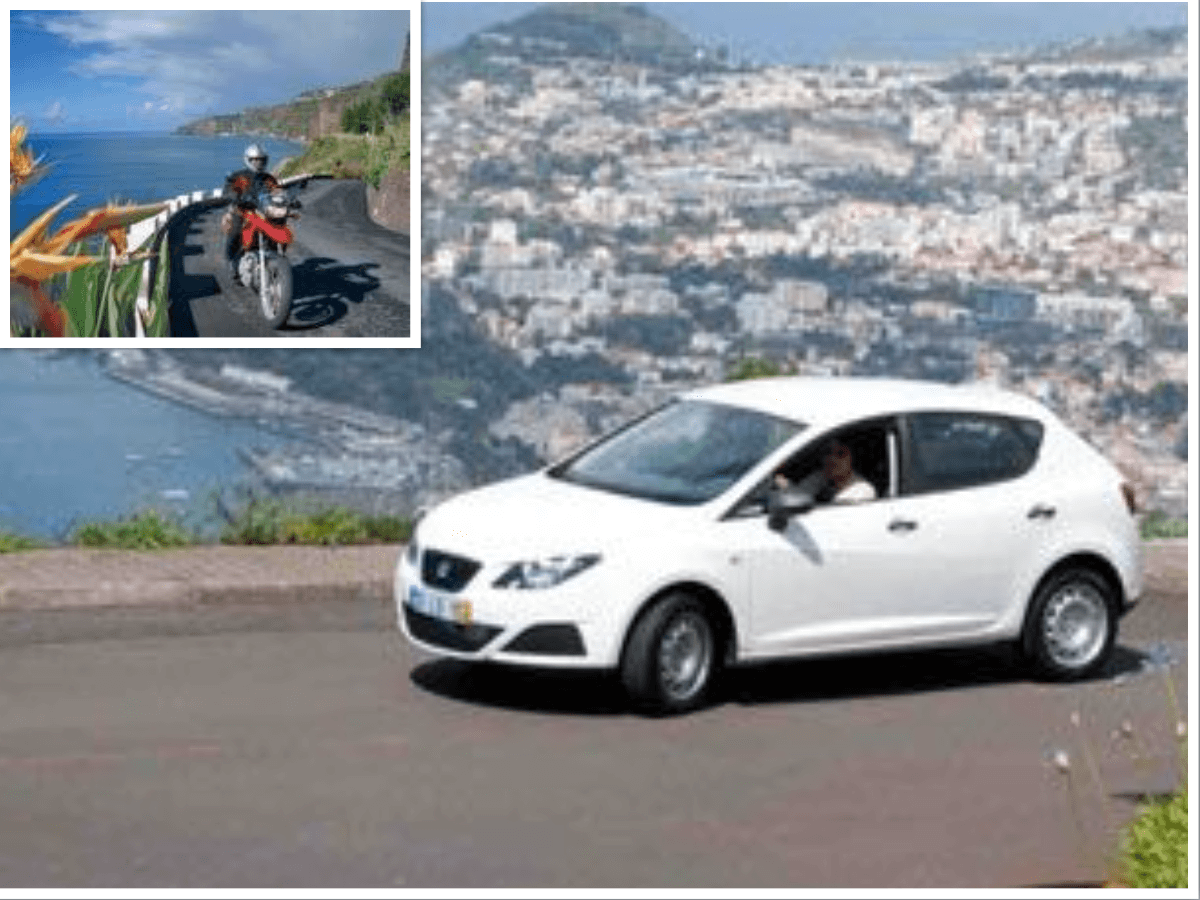 Guests can explore Madeira with a rental car or a motorbike.  Rely on our excellently maintained vehicles for your island tours. Take the many curves and height differences in Madeira easily and safely with our rental cars and motorcycles.

The mountainous landscape of Madeira, the paths along the aqueducts (levadas), the plateau - all these are the reasons why more and more mountain bikers are thrilled to discover the island of Madeira. Somewhat less demanding bikers explore the island by e-bike.

The history of the island

Historical in the Atlantic

In 1419, on the orders of Henry the Navigator, the archipelago, which had already been recorded on Italian and Spanish nautical charts in 1350, was rediscovered by Joao Gancalves Zarco and Tristao Vaz Teixeira and conquered for Portugal. The island was an excellent base for all the activities of the great, well-known naval power Portugal.

Since the 15th century, the island has played an important role in the history of the great conquests and discoveries of Portugal and has also become an important and rich hub for all Atlantic trade routes. It was also Madeira and the neighbouring island of Porto Santo from where Christopher Columbus began his "Discovery of America".

After the island archipelago was divided between the captains of Funchal, Machico and Porto Santo, a period of economic prosperity began in 1425, wheat was grown. In its heyday, managed by about 150 estates, more than 3,000 "moios" (old weight) cereals were sold to mainland Europe. The trade was carried out by Portuguese and Genoese trading houses.

At the end of the 15th century, agriculture changed - the cultivation of sugar cane became significant and the "white gold" was exported to the whole of Europe. Slaves from the African colonies of Portugal worked in the sugar cane fields. The first mechanical processing plant that ran with hydropower was developed by the Madeirenser Diogo de Teives, and gave an enormous boost to the production of sugar.

In 1506, production and processing reached a volume of more than 230,000 "arrobas" (about 4 million kilograms) per year. This period of sugar exports was an era of great wealth and culture. The island was a well-known and cultivated place. Even today, the museums still contain testimonies of this wealth of art and the art of this period, and even today, one can still see one of the largest and most representative collections of flemish painting in the Museum of Sacred Art in Funchal. Other testimonies of this period are the Episcopal Church in Funchal, the church and the monastery of the Claret Women, the churches in Calheta, Santa Cruz and Machico and the chapel in Reis Magos - as well as various windows in the Manueline style, which can also be seen in the museum of the "Quinta das Cruzes". But since the last decades of the 16th century, sugar exports have declined dramatically, the plants were initially affected by a disease, but above all Brazilian sugar pushed the Madeiran from the market. Ironically, it was the Brazilian one, because Madeirenser had modernized the sugar production there with its machines.